Greater love has no one than this:
to lay down one's life for one's friends.
John 15:13

A Global ALERT – We MUST RESCUE the Children!

I want to acknowledge the humanitarians, politicians and journalists that are trying to alert the world of the URGENT NEED to help migrant children displaced by war who are in refugee camps alone, unaccompanied and without loved ones!

Let’s start with an image of a child affected.

“Looking scared and utterly alone in life, little Mo Ahmed wanders around the jungle refugee camp in Calais dreaming of a country he simply calls ‘UK’.

‘UK, UK,’ says the child, as he points in the direction of England, less than 30 miles across the Channel.

Through an interpreter the little ten-year old boy explained:

“My mother and father died and I was left to get away by myself. It has been very hard, but people have been very kind. Now I want to go to the UK, where I will have a chance to go to school and to have a safe life with good people.” Mo Ahmed, Ten-year old refugee orphan

Look at the conditions in this refugee camp! 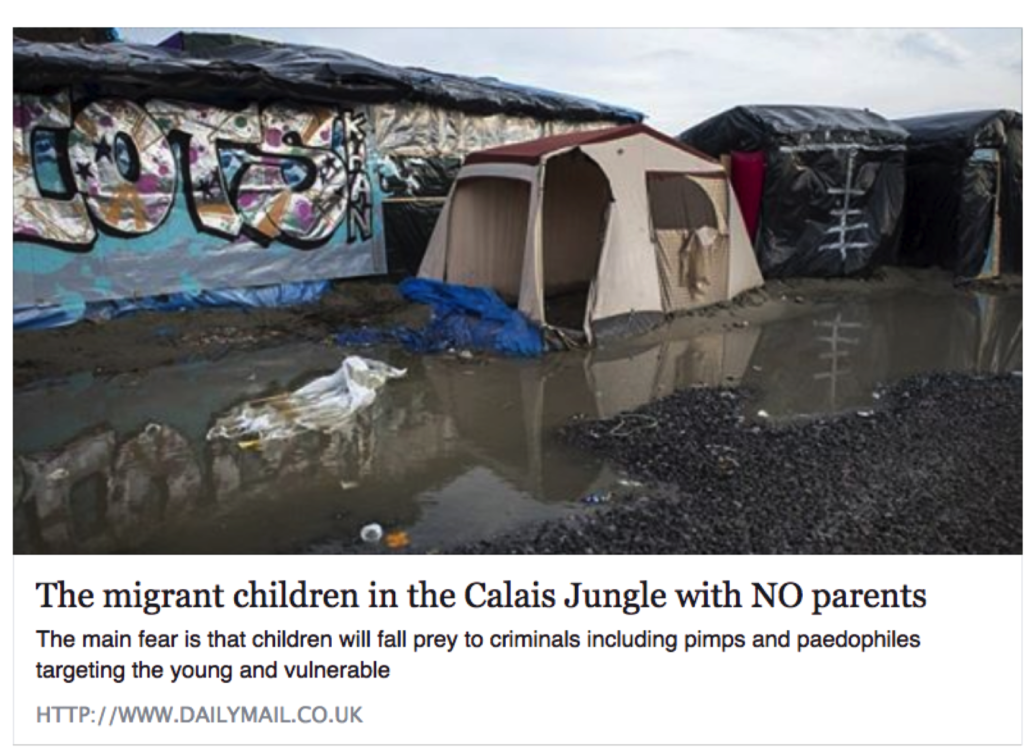 The organization Save the Children has urged Britain to take in 3,000 orphaned refugee children who are in Europe. But the plea was rejected by David Cameron amid fears it could encourage more to make the treacherous journey across the continent.”
Source: http://www.dailymail.co.uk/news/article-3422601/Fleeing-war-refugee-children-Calais-jungle-NO-parents-3-000-orphans-Cameron-won-t-take.html#ixzz4L5mVbMQo

The UK has since passed into law earlier this year the “Dubs Amendment,” promising the most desperate child refugees a place of sanctuary by offering a safe route of passage to their country.

“Lord Dubs, a Labour peer who escaped Nazi Germany and came to Britain on the Kindertransport programme for Jewish children, embarrassed the government in March when he forced through an amendment to the Immigration Bill. The amendment, which was initially opposed by then Prime Minister David Cameron’s government, forced ministers to arrange the resettlement of unaccompanied children, including orphans, who have made it to Europe into the UK.”

Some children have also been brought to the UK under EU-wide family reunification rules known as the Dublin III Regulations.

The National Observer reported that “up to two million Syrian and Iraqi children have been orphaned by war as of Christmas 2015, having lost one or both parents to air raids, massacres, or from street fighting.”

The Canadian government has chosen not to include orphan refugees in the first wave of refugees brought into the country.

“There are legal and other issues with orphans, which makes it more complex. Undoubtedly, it’d take more time – and time is one thing we don’t have very much of given our targets, so we are not focusing on orphans.”

Sweden on the other hand has been generously opening its borders to migrant children. 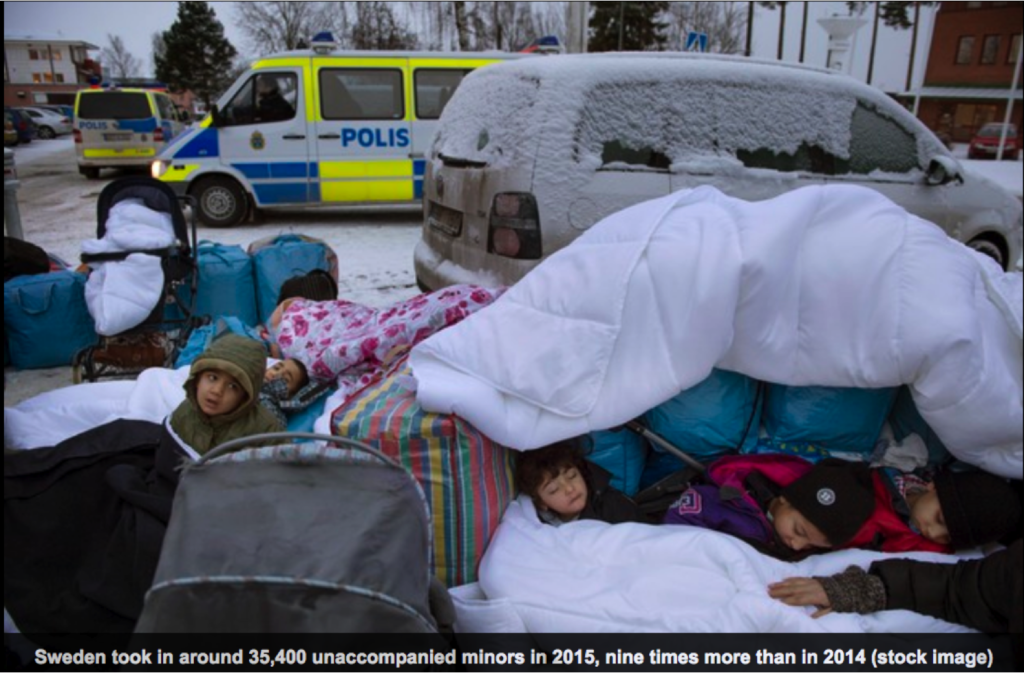 “More than 160,000 people applied for asylum in Sweden last year, the highest number in Europe relative to population size.

The country of 9.8 million is among the European Union states with the highest proportion of refugees per capita.”
Source: http://www.dailymail.co.uk/news/article-3421597/Young-migrants-rampage-child-refugee-centre-Sweden-forcing-terrified-staff-lock-office-19-people-rampage-makeshift-weapons.html#ixzz4L5q13xly 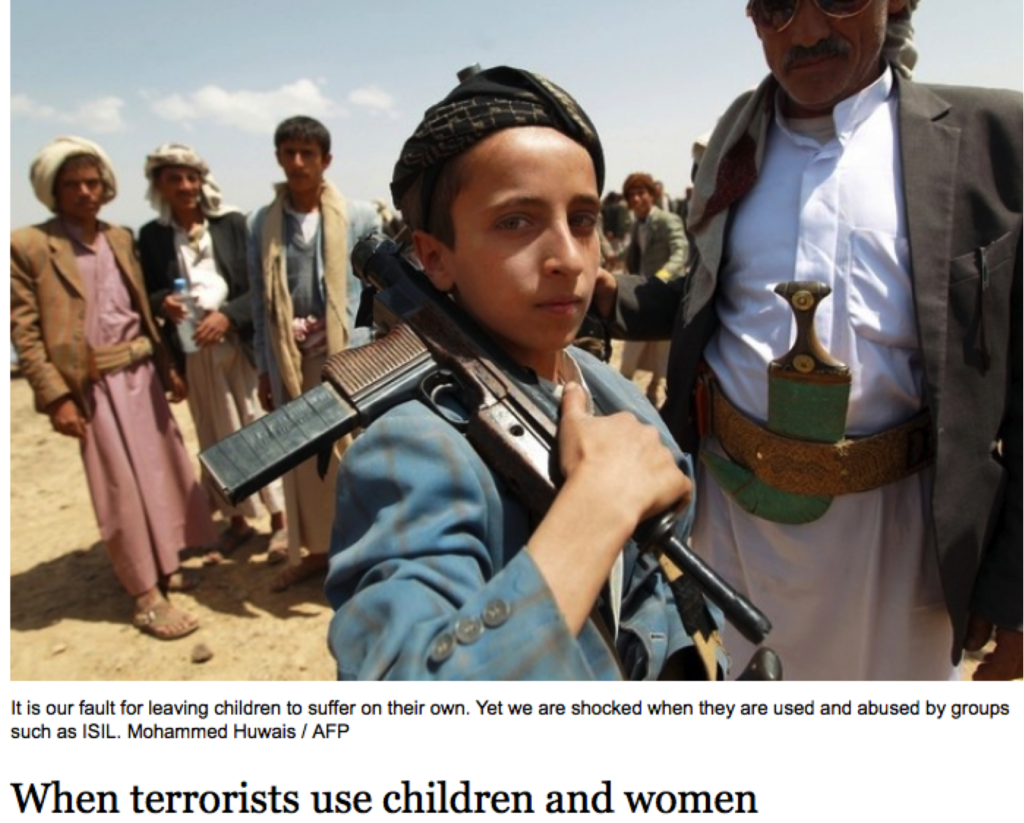 “These words were uttered by a teenager I met at the Nahr Al Bared Palestinian refugee camp in north Lebanon. His face was concealed by a scarf. He clutched an old Kalashnikov rifle.

He, like many others, had forcibly been made a member of the Al Qaeda-inspired Fatah Al Islam militant group, which set up base in that camp in 2006. Many of them were killed in a battle with the Lebanese army in 2007, with reports that some of those who survived have joined ISIL and other groups.

This boy was stationed as a guard at one of the entrances, and given the vulnerability of this position, he was probably one of the first ones to die during a battle.

I sensed his despair and asked him why he was with them as I was leaving the camp. He had such tired eyes as he looked right and left, to make sure no one was listening to him, before he told me he was forced to do so.

“You don’t understand, there’s no choice”

I remembered these words as the world recently watched a 15-year-old boy being held in place by men in uniform as photos and videos were taken of him shirtless with a deadly beige cloth belt filled with more than 2 kilograms of explosives dangling from his waist… The boy had told the authorities that “masked men” had kidnapped him from Mosul and brought him to Kirkuk with a mission to destroy.”

WE HAVE A CHOICE ‘CITIZENS OF THE WORLD’ TO RESCUE THE CHILDREN!

LOVE IS A CHOICE!

We MUST ADVOCATE THAT GOVERNMENT AUTHORITIES ACT NOW TO HELP AS A FIRST PRIORITY CHILDREN IN REFUGEE CAMPS, THAT ARE ALONE AND IN MANY CASES ORPHANED!

A Question to the future president of the United States Donald Trump or Hillary Clinton:

“Will making ‘America great again’ include prioritizing helping children in refugee camps that are alone and unaccompanied by loved ones? Would you agree that helping orphan refugees is both an URGENT HUMANITARIAN priority and a critical GLOBAL SECURITY initiative?”

These children, like all refugees, need safe shelter, food, medical care and love! The children want to go back to school! They want to be safe and protected!  We must as a global community find ways to address an enormous refugee problem.

CAN WE NOT AGREE GLOBALLY THAT WE NEED TO ACCELERATE BRINGING THE CHILDREN THAT ARE ALONE AND DESPERATE TO SAFETY?

According to the new UNICEF report, “Uprooted: The Growing Crisis for Refugee and Migrant Children, nearly one in every 200 children worldwide is now a refugee, with Syria and Afghanistan alone accounting for nearly half of all the child refugees under the care of the United Nations. According to the report, Turkey hosts the largest number of recent refugees, and is “very likely” to be the largest host of child refugees in the world. Relative to population size, Lebanon hosts the largest proportion of refugees by a wide margin.”

Unaccompanied children in refugee camps are easy prey for terrorists. Some are being forced to become suicide bombers. Some girls are being taken as ‘sex slaves’.

“At least 10,000 unaccompanied child refugees have disappeared after arriving in Europe, according to the EU’s criminal intelligence agency. Many are feared to have fallen into the hands of organised trafficking syndicates.

In the first attempt by law enforcement agencies to quantify one of the most worrying aspects of the migrant crisis, Europol’s chief of staff told the Observer that thousands of vulnerable minors had vanished after registering with state authorities.

Brian Donald said 5,000 children had disappeared in Italy alone, while another 1,000 were unaccounted for in Sweden. He warned that a sophisticated pan-European “criminal infrastructure” was now targeting refugees. “It’s not unreasonable to say that we’re looking at 10,000-plus children. Not all of them will be criminally exploited; some might have been passed on to family members. We just don’t know where they are, what they’re doing or whom they are with.”

Does anyone care what God thinks about all of this?

God hears their cries for help!

God is expecting His People to URGENTLY HELP CHILDREN AT RISK!

“Give justice to the poor and the orphan; uphold the rights of the oppressed and the destitute.” Psalm 82:3

“Pure and genuine religion in the sight of God the Father means caring for orphans and widows in their distress and refusing to let the world corrupt you.” James 1:27

God is “Father to the fatherless, defender of widows–this is God, whose dwelling is holy.” Psalm 68:5

WHAT SHOULD DISCIPLES OF JESUS DO?

Firstly PRAY! Pray that God will help our political and humanitarian leaders to prioritize and ACT to bring migrant children that are alone and orphaned to safety.

Secondly GIVE! We must contribute financially, in accordance to our ability, to help our governments and humanitarians that are on the ground trying to help.

Thirdly ACT! We must stand united to advocate for our global political leaders to ACT to address the refugee crisis with a special emphasis on the vulnerable children who are being preyed on by evil. All countries must share the burden of responsibility!

God will help us!

Remember God’s Promise is this:

“If my people, who are called by my name, will humble themselves and pray and seek my face and turn from their wicked ways, then I will hear from heaven, and I will forgive their sin and will heal their land.” 2 chronicles 7:14

URGING ACTION TO HELP VULNERABLE CHILDREN Tom Brake MP, the UK Liberal Democrat foreign affairs spokesperson, said: “This inaction is becoming unbearable, and every day that passes that the government fails to act is a day when a child is at risk of being trafficked and exploited in a foreign land far from home.”

Political leaders of the world may Our Holy Lord Jesus Christ help you to understand that He is calling YOU to ACT to help the vulnerable children NOW!

Please join A Peaceful Revolution in the Name of Jesus Christ, a global Christian peace movement that is uniting Christians in prayer DAILY at the time Our Lord Jesus died for us, 3pm, each of us in our local time zones. At this time we remember the Passion of Christ:  we remember how much Jesus suffered to save us as we pray for the Holy Spirit to help all souls to come back to God, to repent and to live in peace. Let us remember to pray especially for our vulnerable little children who are alone counting on our love for them!

What happens to a child displaced by war that never experiences our love and charity?

What happens when they do experience our love and charity?

They will love because we first loved them when they needed us! That’s how we end terror and create peace in our world!

“Jesus said to his disciples: “Things that cause people to stumble are bound to come, but woe to anyone through whom they come.  It would be better for them to be thrown into the sea with a millstone tied around their neck than to cause one of these little ones to stumble.”  Luke 17: 1-2